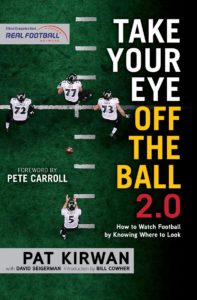 Renowned NFL analysts’ tips to make football more accessible, colorful, and compelling than ever before More and more football fans are watching the NFL each week, but many of them don’t know exactly what they should be watching. What does the offense’s formation tell you about the play that’s about to be run? When a quarterback throws a pass toward the sideline and the wide receiver cuts inside, which player is to blame? Why does a defensive end look like a Hall of Famer one week and a candidate for the practice squad the next? These questions and more are addressed in Take Your Eye Off the Ball 2.0, a book that takes readers deep inside the perpetual chess match between offense and defense. This book provides clear and simple explanations to the intricacies and nuances that affect the outcomes of every NFL game. This updated edition contains recent innovations from the 2015 NFL season. 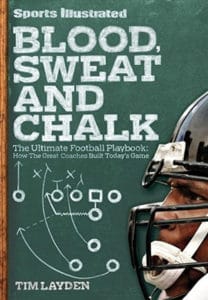 The modern game of football is filled with plays and formations with names like the Counter Trey, the Wildcat, the Zone Blitz and the Cover Two. They have become part of the sport’s vernacular, and yet for many fans they remain just names, often confusing ones. To rectify that, Tim Layden has drilled deep into the core of the game to reveal not only how these chalkboard X’s and O’s really work on the field, but also where they came from and who dreamed them up.

These playbook schemes, many of them illuminated by diagrams, bear the insignia of some of the game’s great innovators, men like Vince Lombardi, Don Coryell, Tom Osborne, Bill Walsh, Tony Dungy and Buddy Ryan. But football has also been radically altered by the ingenious work of men with more obscure names, like Tiger Ellison, Emory Bellard and Mouse Davis.

In Blood, Sweat and Chalk, Layden takes readers into the meeting rooms-and in some cases the living rooms-where the game’s most significant ideas were hatched. He goes to the coaches and to the players who inspired them, and lets them tell their stories. In candid conversations with some of football’s most intriguing characters, Layden provides a fascinating guide to the game, helping fans to better see the subtleties of America’s favorite sport. 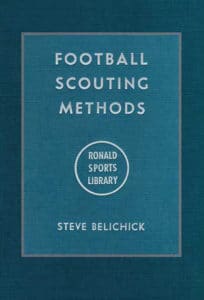 Football Scouting Methods” explains the scouting strategies and insights of author Steve Belichick, considered by many to be the ablest football scout of his era. He coached the U.S. Naval Academy football team for 33 years and played for the NFL’s Detroit Lions before World War II. A New York Times headline described him as the “Coach Who Wrote the Book on Scouting” and stated that Houston Texans General Manager Charley Casserly described “Football Scouting Methods” as “the best book on scouting he had ever read. 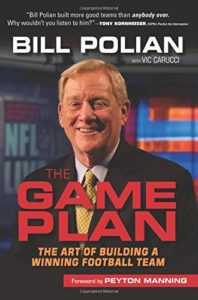 As one of the most successful general managers and team presidents in NFL history, few people understand how to create the blueprint for a winning football team like Bill Polian. After building the Buffalo Bills team that went to four consecutive Super Bowls and taking the expansion Carolina Panthers to the NFC Championship just two years after the team’s creation, he was responsible for the Indianapolis Colts drafting Peyton Manning with the first overall pick in 1998 and oversaw the team’s victory in Super Bowl XLI. Now, Polian shares his blueprint for building a successful football team in The Game Plan. He details the decisions both a team needs to make in the regular season and the offseason to bring teams to the postseason and the NFL’s ultimate test of a well-built team: the Super Bowl.